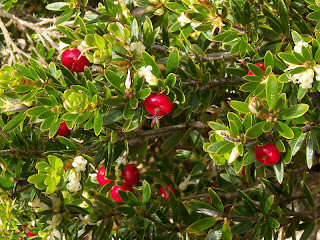 Cheeseberry, Cyathodes straminea. "A much-branched sprawling shrub rarely more than 1m tall. The white bell-shaped flowers are clustered amongst the leaves at the ends of the branches. The drupes (false berries) are usually shiny red, and are flattened, resmbling an Edam cheese. Old flowers sometimes hang on to the fruits." (From Alpine Wildflowers of Tasmania, Plant Identikit.) 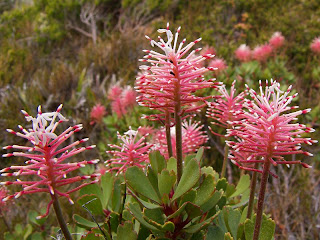 Mountain Rocket, Bellendena montana. The petals have fallen off the flower stalks here. 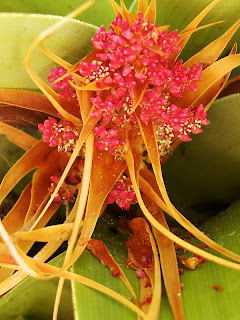 The Pandani (Richea pandanifolia) are in flower. These red flowers are tucked under the higher leaves on the plant. 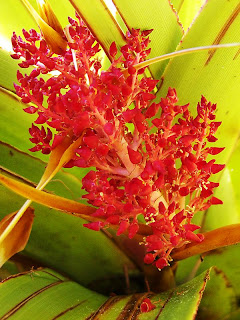 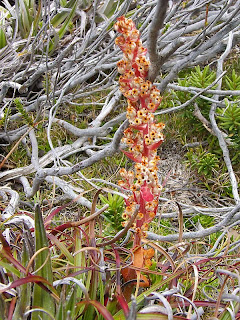 I wasn't entirely sure what this one was at first, however I've decide it's a Curly Mountainheath, Dracophyllum milliganii. However, the flowers do seem a little coloured for this species, although the rest of the plant fits, so while I'm pretty sure its a D. milliganii, I'll stand corrected. It was comfortably co-existing here with some Pineapple Grass (Astelia alpina). 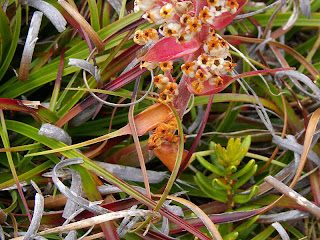 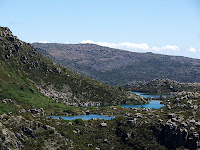 Had a good walk to Tarn Shelf on Friday. Haven't done this walk for a while. It's really good in autumn when the fagus is out, but it was pleasant enough yesterday. Tarn Shelf is just that - a shelf, crowded with large and small glacial lakes half way up the side of the Rodway Range in the Mt Field National Park. The range falls steeply then flattens out across the shelf, and then falls steeply again to Lake Seal and Lake Webster. The shelf itself ranges between about 100m and several hundred metres wide, and it gradually falls from south to north. It extends a little over 2 km between the Rodway Hut and ski tow in the south to Lake Newdegate in the north. 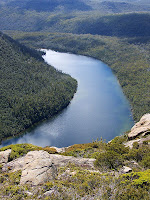 The walk has great views across the eastern section of the park, especially looking very steeply down on Lake Seal. Views also of Lake Webster, Platypus Tarn and the Mt Field East block. 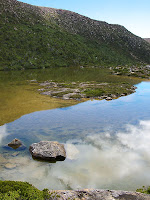 The tarns themselves are great for sitting beside. Swimming was tempting in the hot sun, but the water was predictably freezing cold. 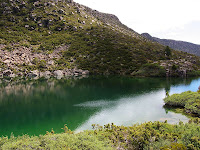 The deep green reflection of the slopes of the Rodway Range in Mackenzie Tarn was striking. 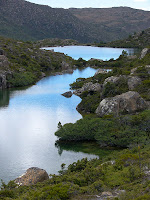 Mackenzie Tarn, with Johnston Tarn beyond. 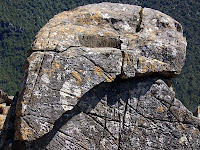 This interesting and scarred rock sits beside a very good lookout along the windy track from the lowest ski lodges out onto the open plateau. 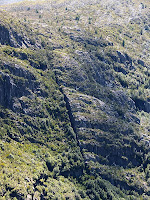 This very obvious faultline sits on the steep slope of the saddle between Tarn Shelf and Mt Bridges, and is obvious from the lookout mention just above, as well as from several easy vantage points along the shelf.

Upon first glance, this little bush near the Pipeline Track at Ridgeway resembled an Allocasuarina. However the branch/leaf structure is quite different on close inspection. I hadn't seen these little white berries before, but I had seen similar ones (with the little 'nut' on top) in other colours. This led me to identify it as Exocarpos strictus, using the vascular plant key at the UTas website. 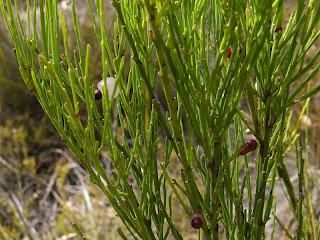 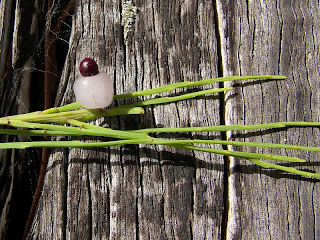 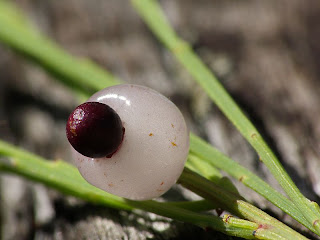 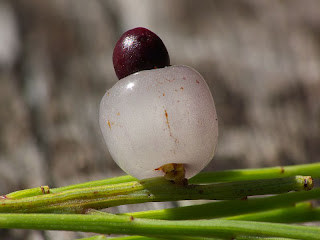 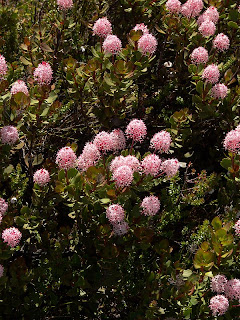 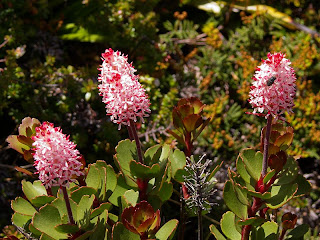 Interestingly these ones lacked the red colouring of most of the other specimens. 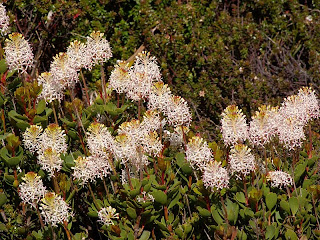 Leptecophylla juniperina, the Mountain Pinkberry. This species was previously a Cyathodes, and seems to have been formed by classifying C. parvifolia and C. juniperina together. They now form two sub-species, (parvifolia and juniperina) and I'm not clear how to tell those apart. Subspecies parvifolia appears to be more likely on mountains and juniperina on coastal heaths, but my book is ambiguous about those habitats. However, based on the size of the leaves and fruit, I think this L. juniperina subsp. parvifolia. 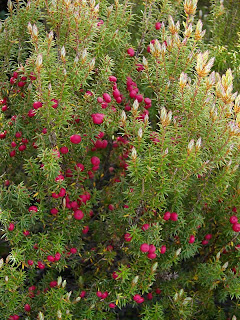 Milligania densiflora, the Silky or Common Milligania. Thes plants have some similarity to Astelia alpina, the Pineapple Grass, and I think that sometimes when people refer to Pineapple Grass, they have seen Milligania. There are several species of Milligania, and I'm not entirely sure how to tell them apart when they're not flowering. The colour of the leaf surfaces seems to be the key, but I'll have to see what the difference really is between green and blue-green. 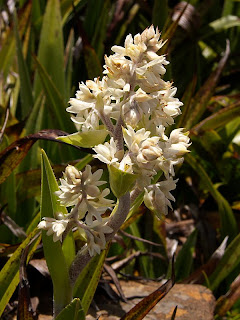 Donatia novae-zelandiae, the Western Cushion Plant. In the 4th edition of "Flowers and Plants of Tasmania" (Launceston Field Naturalists Club) it appears to me that the photograph of this species has been confused with that of Dracophyllum minimum, which will confuse some people. The flowers appear to be the most obvious distinguishing feature. 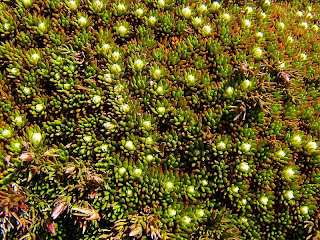 Richea scoparia, known simply as Scoparia, or sometimes #@#!%& Scoparia. This was the only reasonably intact flower I saw, most others having shrivelled already. 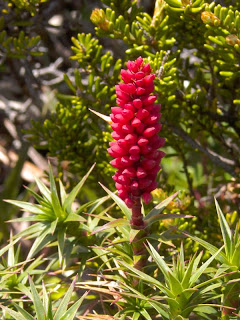 Telopea truncata. There were still Waratah bushes at Hartz last weekend with flowers on them, although most had finished. 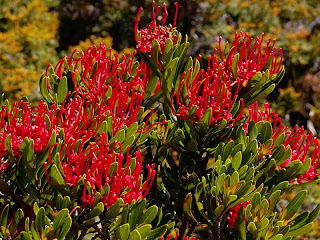