Found at The Springs on Mt Wellington. This little chap was playing very happily, including among the cars, chasing himself in their mirrors and windows. 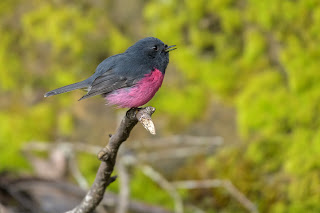 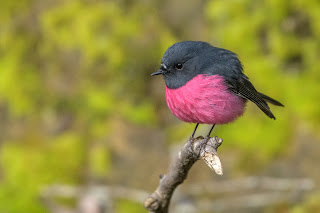 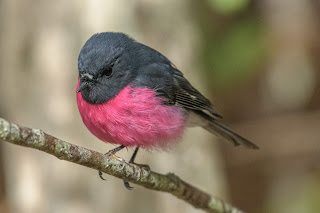 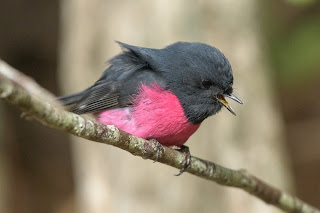 I was fascinated to discover the number of mountains that could be seen from Mount Jerusalem and King Davids Peak in the Walls of Jerusalem National Park. I'll try to post some others, but this one is the Wellington Range, around 140 km distant. It's a daylight shot on a day with some haze, so I've significantly increased the contrast as a B&W photo to show the mountains more clearly. It was obvious through the camera viewfinder, but somewhat indistinct to (my) naked eye.

I think it also makes sense that Mt Jerusalem is visible from Mt Wellington, along with King Davids Peak. I don't think I've ever tried to find them in the NW view.

When you book to do the Overland Track, they warn that poor weather can occur at any time. However, in February, extended periods of wind, rain, sleet, hail and snow are unusual. This February was "unusual", perhaps because so many Tasmanians were praying for rain to douse bushfires threatening communities during a hot, dry, windy spell. All Overland Track walkers should take heed. The conditions depicted below occurred in February, one of the most reliable months. Don't skimp on gear, and watch the forecast continually.

In January I was on Mt Jerusalem when a thunderstorm came through. It rained briefly, and proceeded on down the Great Pine Tier, shortly afterwards sparking the Central Plateau fire near Lake Fergus. Around the same time a fire started near the Tahune Airwalk west of Geeveston in the far south. This fire went on to seriously threaten communities from Lonnavale to Dover sparking a large evacuation. I live in Huonville. The rain that came was a godsend, so complaints are not allowed.

However, finding somewhere to bushwalk was subsequently tricky - fires actually still burning, roads closed, tracks and whole areas closed, large areas burnt, plus advice not to go anywhere "remote", and quite poor weather forecasts, especially given it was February. Talking to a friend, we tried to convince ourselves Frenchmans isn't "remote". It's only a day-and-a-half walk from the road to Lake Tahune (less for the fitter walker and Frenchmans has been day-jogged I believe). The Overland Track was free of problems it seemed, but there were no suitable bookings available, February being quite popular.

However, watching the booking system closely, I did manage to get a booking on Monday 11th when someone else cancelled. With some transport issues solved, it was on. One problem: The weather forecast was for solid rain and snow. The forecast was such that the firefighters on the Central Plateau were worried about being able to fight the fires, as the wind, cold, snow and all would make it very inhospitable without reliably extinguishing the fires. I went anyway, hoping for changeable weather, which often makes for quite spectacular landscapes (and photos) in the Tasmanian highlands. And it is the OT, with relatively easy tracks plus huts. I wasn't disappointed.

The 10th Feb was dismal at Cradle Valley and across the mountains (as observed, and as reported by punters starting that day), and at least one OT punter returned from the plateau having realised their gear wasn't up to the task. The forecast for the 11th wasn't quite so bad, although it didn't look good for any day before Friday 15th. I didn't have enough food to stay till then. (Yes I know, but that's partly what makes for a light pack...)

I did a very quick trip, thus a very light pack, which helps make it quick...etc. Regular but not constant rain through to Pelion was then enhanced by an accurately forecasted good snowfall on the Tuesday night. Pelion Plains and Pelion Gap were quite magical on Wednesday 13th Feb. While some of the punters were a bit disappointed by the weather they'd had to deal with, the snow at Pelion was a marvellous compensation for many. I did my bit by talking up the experience. I talked to one excited lady who had never seen snow, and hadn't expected to when she booked the OT.

The snowy scene at Pelion Hut, and the snow up to and at Pelion Gap was quite spectacular. I didn't realise it, but when I set off, nobody else had - there was obviously lots of activity, but little action. Thus, all vegetation bore it's full load of snow. I was the snowman. Beautiful, but very wet and cold. I dodged a few massive loads with off-track manoeuvres, but hopefully the three blokes who followed me fairly closely cleared it for everyone else. A nice girl from Seattle told me that night, at Windy Ridge, she'd wondered which poor sod had to go first. There was then also the issue of correctly locating the extensive boardwalk beneath the snowy camouflage, leading from the Gap towards Kia Ora. My new Pelion Gap friends were grateful for my continuing sacrifice. The heater at Kia Ora proved unlightable. Ranger Ken was going to fix it when I saw him at Windy Ridge.

I was a bit naughty with the heaters. At Pelion the starting of the heater produced a veritable mountain of wet gear arranged in a growing variety of imaginative ways around it, and hopefully improved a few people's experience of walking to Kia Ora in snow the next day. Later in the evening, I pulled my head in(to my sleeping bag) when someone opened the bedroom door and asked if the bloke who knew how to make the heater work was there. I think someone then managed to read the (admittedly confused) instructions. At Windy Ridge the assembled crowd were huddled glumly around the communal area in hats, scarves, gloves and down jackets, but livened a lot after the heater was turned on. I have to admit it was actually 11 degrees, but they were all damp and cold (your honour), and had been for some days. An excited Queenslander told me she hadn't been warm for four days, as she stood rotating below the wall-mounted gas heater.

Some ferry issues were encountered when high winds whipped up waves on Lake St Clair, described variously as "six-foot" and "two-metre" by some punters and the captain respectively. This unfortunately cancelled Belfast Tony's carefully and expensively chartered (and subsequently heavily subscribed) 11am service, but we all managed to get out on the 3:45pm, and Belfast Tony even managed to change his transport operator and get a ride to Launceston that evening, along with the Seattle crew and some others. The boat captain (Mick? Mike?) was also from Belfast, so they got on very well, despite the furious rebooking required by Mick/Mike's earlier cancellation of the charter.

The photographic opportunities were limited by rain, sleet and snow, and the water-averse nature of my new tiny Canon mirrorless camera, but nevertheless, I'm pleased with the results, presented below.

I'll note here that stepping outside to photograph things was a very chilly experience, with a nasty cold breeze blowing from the west (or somewhere).

Link to full-size copy of this panorama (22MB).

Link to full size copy of this panorama (24MB)

Fullsize copy of this panorama is here (40MB)

Back to Freycinet for an "easy" walk to get back in the habit of carrying an overnight pack.

I took the coastal route in, and it looks to me like there's been some trackwork since I last went that way.

There was water at Cooks Beach as usual, and if the rain over this week happens as predicted, the tanks should fill up. There was no water anywhere else, except for a tiny trickle on rocks on the eastern side of Mount Graham, and I doubt you could find a way to harvest it. Even the stagnant ditch at Wineglass Bay South was dry. The east coast certainly was in drought until the last few days, but maybe some decent rain will now fall.

Several tracks show signs of minimal maintenance, but maybe that's usual at the end of winter.

The place was mostly suitably deserted beyond Lagunta Creek, with only the occasional passing boat or plane. This enabled easy washing in the sea without offending anyone - the only people encountered were high on Mount Graham.

This remains a delightfully peaceful place, and I must go back to photograph the birds.


Link to full-size panorama from Mount Graham. (Large file!)
Posted by Mark at 22.11.18 No comments:

The view from Mount Wellington today. This is from the ZigZag Track. 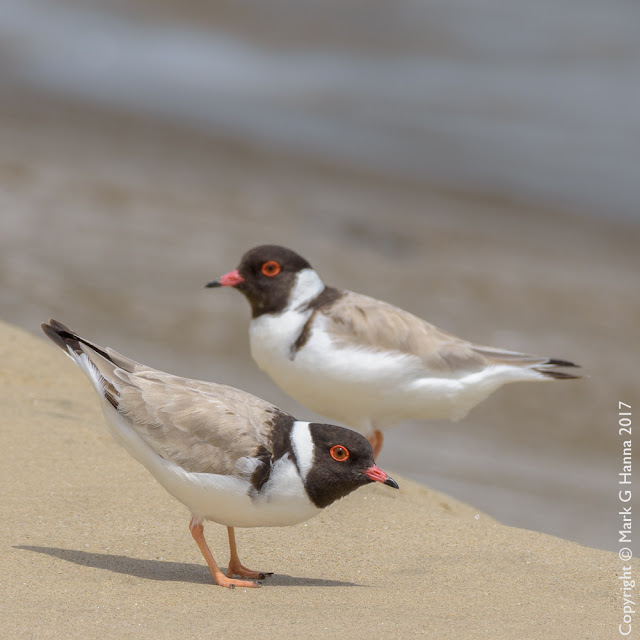 I love these birds. They’re small but braver than their size suggests. You find them on beaches, including the largest, wildest and stormiest. There will usually be two of them, but sometimes more (including offspring). As you walk along the beach, they will walk away from you, which is how they avoid you but also lead you away from their nest. After a little while, they will fly back around you, and, if nesting, check their nest (but only when you’re not obviously watching).
The nest is found above the high tide line, in the sand, shingle or dune-edges. Try not to walk close to dunes, especially if you see them wandering about the beach. Walk below the high tide line, as they are smart enough not to nest there.
These two were on Roaring Beach on the Tasman Peninsula. I saw them there earlier in the year, and very recently went back to try to photograph them with the new lens. They were still about, and led me up and down the beach, dutifully protecting a nest. I also attempted to get them votes in the Guardian’s Australian Bird of the Year award. They didn’t win, but I still think they’re the pluckiest little birds in the book*.
There’s a problem with the naming of this bird – “they” seem to have changed their name to Thinornis cucullatus, and there are two sub-species. In addition, of course, they’re also known as the Hooded Dotterel, and there's a lengthy online article explaining why they are NOT dotterels.

*So, what book? Well, it’s Watt’s Standard Book of Tasmanian Birds**, the unexpurgated version, with the Gannet (Australasian).
**Ok, really it’s the Field Guide to Tasmanian Birds by Dave Watts. Buy one, it’s great!
Posted by Mark at 26.12.17 No comments: 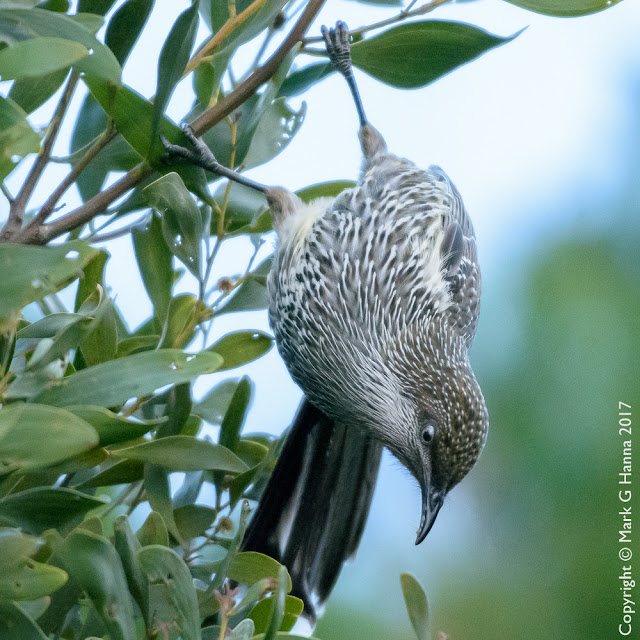 This bird was very active and gymnastic, bouncing from tree to tree looking for food. I found him at the Franklin riverside walk, along with a couple of others in this calendar. He wasn’t too concerned about me, presumably having correctly assessed my chances of climbing the tree he was in. They have a red-brown patch under their wings. I like these birds, they’re sort of cheeky. I like to think he’d say “Thanks mate, got me looking all undignified. And then put it in the calendar. Champion!”