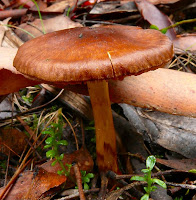 This could be Dermocybe splendida. 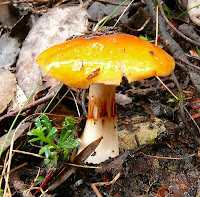 This one is Cortinarius sinapicolor. From Fuhrer(1) - "The fruit bodies are easily recognised by the rich, bright yellow colour and the thickly glutinous caps and stems."C 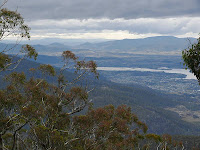 Nice walk today on Mt Wellington despite the cool breeze, occasional drizzle and showers and general overcast. The mountain is, as ever, changing with the seasons! It was one of those days where you get very warm walking in more than a thermal top, as long as the wind isn't blowing. Then, when you stop, the breeze picks up, and you get very cold within about five minutes. So you put your jacket on, but even walking on the flat makes you sweat in your nice warm jacket. Oh well, never mind. I have some infirmities, which I hoped would be helped by a good gentle walk. The hip may have bursitis, which is inflammation of the bursa. I have visions of a schoolyard, with a small man in a grey suit running round it on fire. Sorry! I suppose I should now actually go to the doctor. Sounds boring, as does the treatment at that link. 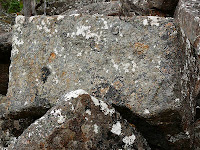 I shall have to investigate the lichen. The lichen on these rocks along Hunters Track were interesting. I am unclear what the circular patterns are or why they might grow like that. I think the books about these things are quite expensive - I suppose it's a quite specialised area of study.

Lydia Marino, the Wellington park ranger, responded quickly to my query about mountain bikes on Mt Wellington. There's a $180 on-the-spot fine which can be imposed, and this would be done if they caught riders on the Pinnacle Track or ZigZag Track. Obviously it's difficult, because there isn't a whole lot of resource for patrolling the mountain. Sounds like the rest of us need to keep an eye out. The response was a little more encouraging than I expected, but clearly they can't watch everyone all the time.
Posted by Mark at 9.4.08 No comments:

Found this interesting site from the University about Winifred Curtis.
Posted by Mark at 6.4.08 No comments: 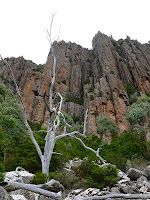 Having acquired a replacement vehicle while the 'Cruiser awaits its colonoscopy and possibly a diagnosis of "rebuild or die", I was able to sneak off for a walk this afternoon. The tiny blue car has a 3-cylinder motor, and cheese-cutter tyres, so I didn't think taking it up the Hartz Road would be a comfortable experience. Settled for a trip to Mt Wellington on nice bitumen roads. 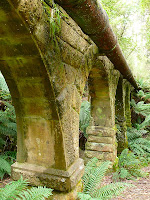 Quite cool today, although the sun did actually struggle out of the cloud cover for a few moments at one point. Had a nice walk, first on the Pipeline Track and then up to the Chalet and return. A little way below Ferntree on the Pipeline Track are the aqueducts. These were built in 1880-81, to replace a previous wooden bridge which was in serious disrepair. 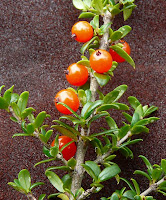 Found the Mountain Currant (Coprosma nitida) displaying its bright red fruits, making quite a contrast with the Pink Mountain Berry. In checking my identification, I note that the Pink Mountain Berry may have changed classification from Cyathodes parvifolia to Leptecophylla juniperina subsp. parvifolia. I will have to follow it up. So far, my internet investigation reveals it is complex. 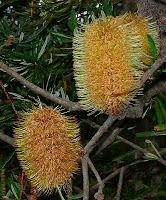 The track near the chalet was also enlivened by the Banksia (Banksia marginata) which is flowering quite profusely. I note this plant is variously called Banksia, Silver Banksia and Honeysuckle. Only one other species of banksia, B. serrata is found on mainland Tasmania. Anyway, just before you reach the Chalet, the track passes through a 'tunnel' where the banksias meet overhead. 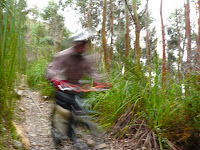 Encountered some mountain bikers on the Pinnacle Track, where they are not supposed to be. I'm all for drivers looking out for riders on the roads, but I do think their continual bleating about driver attitude would be appropriately accompanied by some self-moderation of their colleagues who have no regard for the law. In addition, it would be sensible if these clowns worked out how to travel at a safe speed even on tracks where they're allowed. I am awaiting advice from the Wellington Park Management Trust about how they actually manage inappropriate use of tracks by mountain bikers. If it's anything like their efforts on managing trail bikes on the back of the range, then I don't expect a very encouraging answer. I have to admit a certain feeling of schadenfreude when one of them fell off after he had passed me. How terrible of me. His crash was, fortunately, seemingly trivial.