Collins Bonnet in the snow 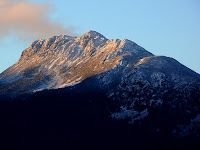 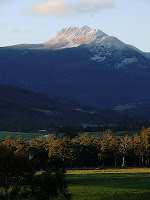 Mt Montagu was also quite attractive. 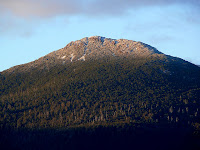 Driving further, around to Opossum Bay, if you go to the end of the road, you come to a turning circle at the gates of the Arm-End Reserve. There are tracks all over this, as you can see on Google Maps. I walked out to White Rock Point, where there's a navigation light and a radio antenna. There would normally be a good view of the mountain from here, but it was a bit cloudy on Saturday. It was lovely in the sun for a while, but then it started raining. Must go back sometime. Would be a good place to take pushbikes I think. 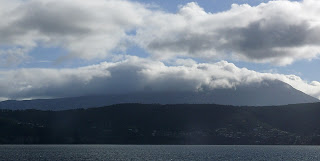 After a hope of a walk in the snow on Mt Wellington was dashed by the persistent rain, and generally unpleasant conditions, I went off to South Arm. Got some rain and drizzle at times, but this made for some interesting light, photographically. The walk along Hope Beach is interesting, if slowed by soft sand and the steepness of the beach. This does not look like a good beach for a swim! Squalls swept in across Storm Bay quite regularly, but it was very nice in the sun while it shone. 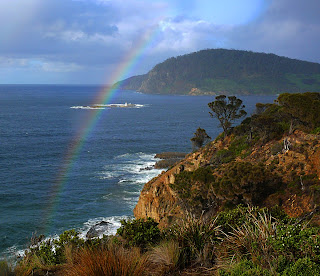 Black Jack Rocks are where Bob Clifford managed to land his catamaran during high-speed trials. The rocks are swept by the waves at high tide. 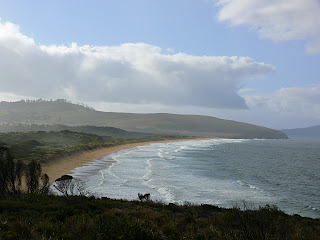 Calverts Beach is said to be good for surfing. 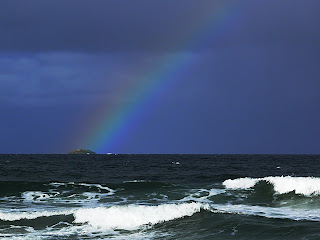 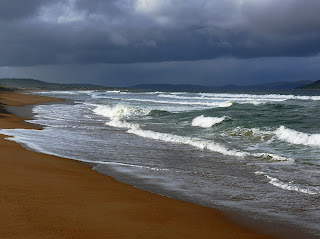 Hope Beach is named after the "Hope", wrecked on the beach on Sunday April 29th, 1827. In his book "Walk into History in Southern Tasmania", David Leaman advances the theory that this was caused by magnetic anomalies below the water's surface south east of the Iron Pot. The light (The Derwent Light) was installed five years later, and removed the need to rely on compass bearings when entering the Derwent. 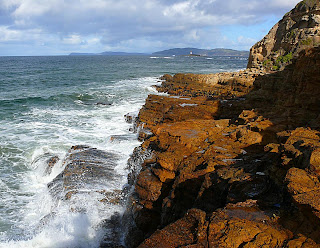 The "Iron Pot" was originally the Derwent Lighthouse, or Derwent Light. The common name may be a reference to the former use of these rocks for processing whales. There were substantial buildings located here in times past. The rocks at the end of Hope Beach are quite interesting, and make for a good scramble. They would be a little damp in high seas, no doubt! 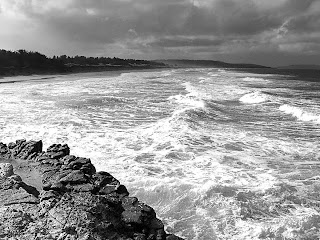 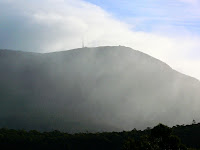 Changeable weather on Mt Wellington yesterday. I had a walk on the lower slopes, first up to the Springs and then back down to the Waterworks from Ferntree. Very cold wind blowing and a bit drizzly at times higher up. The sun was lovely later on, but the view from the Pipeline Track was of the mountain wreathed in misty rain. The BoM website shows the actual temperature never above freezing. The apparent summit temperature at 2:30pm was -12.8 degrees.

I noted that the pushbike riders continue to hurtle down shared tracks. This is despite the numerous signs reminding them to slow down (to walking pace) when they pass walkers. There are a lot of children and older people who would be very badly injured if one of these idiots connected with them. One passed me in the air a few months ago. I may have used the vernacular to remonstrate with him. 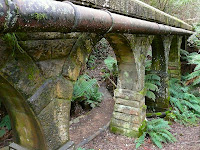 The aqueducts along the Pipeline Track are interesting. I noticed earlier that the shop had a map/brochure about the water supply infrastructure, and I must grab one sometime. The book I have, "The Early Water Supply Of Hobart" (Crawford and Ryan) says these aqueducts were completed in the 1880s, the larger one in 1881, to supply the newly built Upper Reservoir. 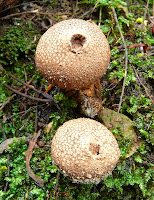 From a fungi point of view, the most interesting ones were these puffballs, a little way up the Fern Glade Track. I found the same ones quite high on the Mountain River Track in May. I haven't been able to identify them - unless they are a later form of Lycoperdon pyriforme which I found, clearly indentifiable, on the South Cape Bay Track. There are similarities, but neither these ones nor the ones on the Mountain River Track appeared to have the pimples lower down. I may have to return to get better photos.