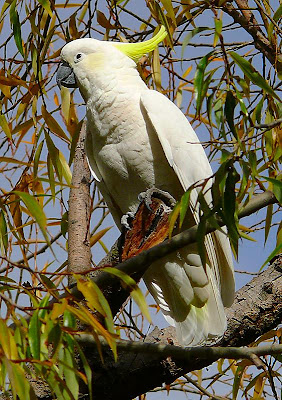 This fellow was sitting in a tree along the Hobart Rivulet the other week. Noisy buggers aren't they? But still attractive.
Posted by Mark at 25.5.08 No comments:

This one is growing on the Octopus Tree. 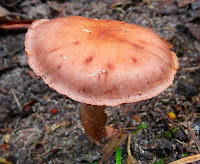 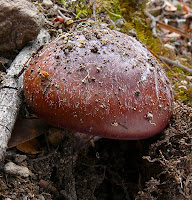 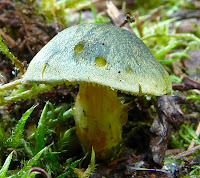 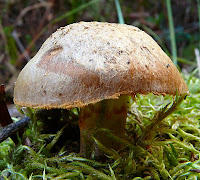 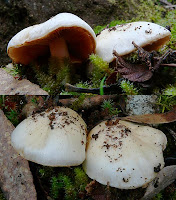 Fungi from the Pipeline Track, growing around the bases of trees along the edge of the track.

This group of four photos are all of the same fungus. These appear to have a rust-red spore, which in a couple of cases had been deposited on caps sitting underneath other caps.

The small rounded cap is a juvenile one of the same type, which was evidenced when turning them over and looking at the stem and gills. 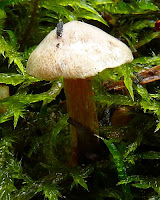 This is a very tiny creamy-white fungus. 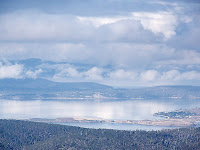 Had a wander around the lower Mt Wellington slopes on Saturday. Cool and damp day, but fine for photographing fungi. The light seemed very blue early on in the day. Later, the water of the estuary and bays around South Arm was glassy and a gentle haze softened the lines of the land. It was quite pretty, in a very Tasmanian way, and had a sort of silky, silvery quality about it.

This is a tiny rock pool on Sphinx Rock, which is composed of Triassic sandstone. This sandstone underlies the dolerite that forms the visible bulk of the mountain including the Organ Pipes. Sphinx Rock, along the Lenah Valley Track, provides a good view, but has a large cliff requiring care and the control of children. Various other sandstone outcrops along this lower level of the mountin are interesting, including Rocky Whelans Cave and Crocodile Rock.

This site is worth a look. Lots of nice photos, especially of the Tasmanian bush.
Posted by Mark at 18.5.08 No comments: 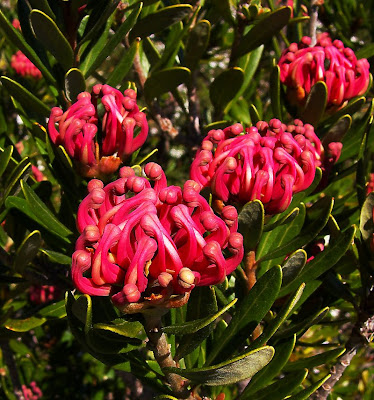 This is the best time of year for fungi, but the dry weather appears to have minimised their appearance so far. However, there were a few interesting ones along the Pipeline Track yesterday. 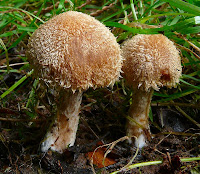 Unidentified so far. Some resemblance to Cuphocybe species. 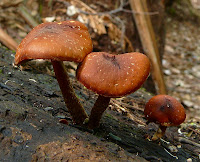 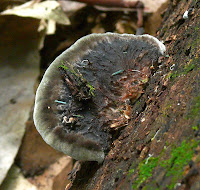 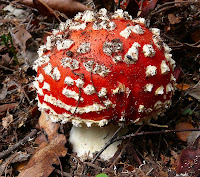 This is Amanita muscaria, the Fly Agaric. It's an introduced species from the northern hemisphere, and is poisonous. It is now classified in the same genus as the Death Cap A. phalloides. You wouldn't be tempted to eat something that looked like this though would you? It might has well have "poison" written on it. These are quite prolific at a particular point along the track, and there are a lot of them growing underneath the leaf litter.

Quite near to the obvious, full-grown A. muscaria, there were some other fungi growing. Looking closely at these however, it appears they are earlier stages in the appearance of A. muscaria. You can just see a pinky-coloured material where the warty surface has started to split apart. 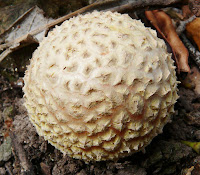 Again in this more fully-rounded fungus, there's the hint of pink showing through beneath the warty white surface. I'm assuming the underlying structure just keeps growing and then the white warts split apart and end up scattered across the red surface.

Not really about the bush, but related. Having to go to a soccer match at Bellerive this morning, I ventured a little further to Cambridge, where the Anaconda store has just opened. Stupid! Stupid! Stupid! So had everyone else. Looked like about 45 minutes in line for a checkout. When I heard them ask for IT to come to the checkouts, I knew it was only going to get worse. So, deciding that I wasn't going to buy anything, I wandered around. In summary, they have a vast amount of stuff, but most of it is cheap crap. The good stuff you'd buy to rely on costs about what you'd expect to pay in the city, and they only seem to have one good brand in any category. It's harder to find too, because it's concealed amongst all the dross. If you want a cheap family tent, or some standard camping gear for occasional use, it might be cheaper than elsewhere. If you want good quality gear, and especially if you want a choice of good gear, keep going to those places up Elizabeth St. You could have got a bargain today, but if time was money, you'd have lost all your gains in the queue.
Posted by Mark at 3.5.08 No comments: