Another rainy day. Had a nice walk on the lower western slopes of Mt Wellington though. In the end the worst I got was drizzle. There are plenty of tracks low down that can be walked in almost any weather.

Some of the plants are starting to flower in recognition of the arrival of "Spring". Wasn't very obvious there last week, although it hasn't been very cold. This is Hakea lissosperma, known as the Needle Bush. One book says it flowers in late Spring (October to December in another book), and is one of the earliest flowers in the subalpine area.

It's been a difficult task lately finding places in Tasmania where it isn't raining. It's a bit of a switch, given that a large chunk of the state was recently reconfirmed as in drought. Now we have diary farmers whose herds are in a bad way because it's too wet. Leave from work dictated that I should find some walks to do, however rain and illness had conspired a bit to bring the plan undone. The Tasman Peninsula can sometimes provide a drier walking venue than elsewhere in southern Tasmania, although sometimes it can be worse too. Last week I managed a few walks there. The first being the easiest, to Mount Brown and Crescent Bay. See the Google map below for walk details.

I hoped the wildflowers would be worth a look, and there were a few out. I'll add some pictures to the Crescent Bay flora post. I believe this is Acacia verticillata. The books describe a number of sub-species of this, which is somewhat bewildering.

This echidna was happily wandering around near the Mount Brown turnoff. He basically ignored me, and was happy to amble away from me digging for ants. He showed no signs of concern at my presence until I actually stepped over him on the narrow track to try to get a shot which included his face. This was successful, but he wasn't keen on walking towards me along the track. I was intrigued by his spiny bum anyway. More photos at Picasa.

View Crescent Bay and Mount Brown in a larger map 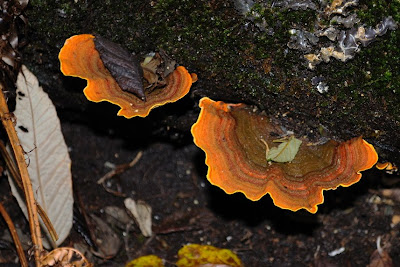 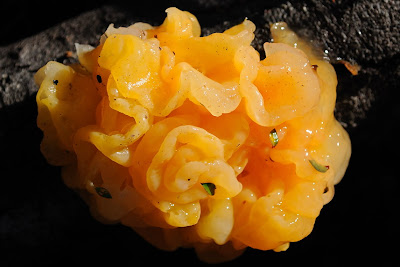 Had a very good walk to South Cape Bay. The weather has been pretty ordinary, and this Wednesday was forecast as fine. Indeed it was, and the sun shone much of the day, with only gentle (if cool) breezes throughout. There has obviously been some rough weather out on our South Coast, and the long swells were sweeping a significant depth of beach when I was there. The surf was quite spectacular at times, with huge barrels forming perfectly along the kilometre and more from Lion Rock to beyond the cliffs where the track emerges. Nobody was there surfing.

The beach is currently graced with a large dead seal, which I could only partially smell due to the cold I was coming down with. Overall, the beach was looking quite wild last week, and the good weather made a visit worthwhile.