Reimagining the what? I'm amused.

I'm reading the Tasmanian tourism industry's paper on major projects. Page 22, entitled "Reimagining the visitor experience: Cradle Mountain" is accompanied by this photo of a young lady sitting outside a rustic hut, enjoying a cuppa, and at peace with the world. Nothing wrong with that?

No, not as long as you understand that the hut is Du Cane Hut, roughly 4 days or so's walk south for most people, and the photo has been flipped 180 deg to improve the artistic layout. So, we're representing Cradle Mountain and Dove Lake with a photo of a hut you can't see there, and even if you could, it doesn't look like that because we've taken artistic licence with it. It becomes just a generic rustic hut in the wilderness, rather than the well-known historic structure encountered as you walk the Overland Track. Reimagined indeed.

It's perhaps not as bad as the business directory a good many years ago which tried to compete with the Yellow Pages. They put Cradle Mountain on the cover, but they'd flipped it 180 degrees. Obvious to most who'd been there, but, at that time, less so to many other people. I think these days, everyone would notice. Amusingly, I think the same was done by one of the GPS manufacturers in an ad which appeared in outdoor magazines. At least on this page, the graphic of Cradle Mountain itself is the right way around.

Few will notice this, or care, but I think it indicates the thinking we see too often - it's about making money from it, not remaining true to anything. The people doing the selling of our wilderness have too often never been there, wouldn't want to go, and have little idea why anyone else would want to. After all that, they do present some good ideas in the paper. The implementation will be interesting. 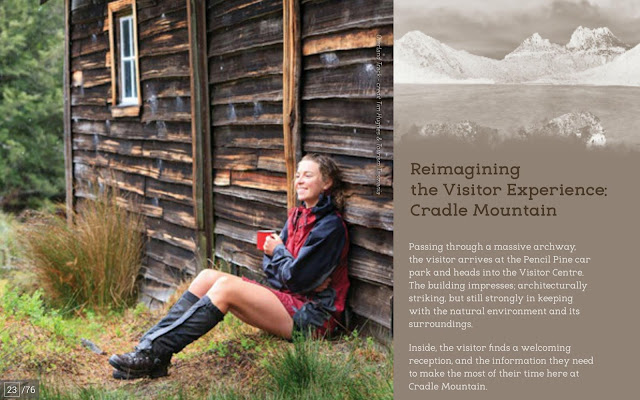 Lots more to come, including some Labyrinth photos, but here's a big panorama looking north from Lake Helios to Mount Ossa. I think this view is superb. The valley drops away precipitously below you, and the Mount Ossa massif rises beyond. This was a little while before sunset after rainy weather boycotted my mountain climbing plans.

From the left, we can see Barn Bluff in the far distance behind the Thetis/Paddys Nut saddle, Paddys Nut, Mount Ossa and all its "bits", Mount Pelion East (pointy), and Mount Pillinger with what I think is probably Western Bluff behind it, although I'm going to have to get a map out and will stand corrected. On the right is Mount Massif, part of the Du Cane Range. Very privileged to be able to sit and look at this.

My previous trip there in 2002 provided great sunrise photos, on film, some of which are here.

Off to the Labyrinth tomorrow. Meanwhile here's the Du Cane Range panorama taken from The Acropolis early the other morning. This is a very spectacular place.

Thanks Parks and Wildlife "Service", for nothing - Update after walk

Planning a trip to Cape Pillar, I had an email from the Three Capes Track project which made clear the track would only be open Fridays to Sundays. Checked the parks website, where their track closure item from 2 October 2014 was the latest info. This remained the latest info on the website until the evening of 19 October 2014, and probably into tbe 20th.

In the hope that maybe the track would be open earlier in the week than Friday, I rang the parks number for the Tasman NP this week. This is their Seven Mile Beach Office. The gentleman I spoke to didn't seem very well informed, but was able to confirm that I could walk the track on Fridays through Sundays, but he didn't think there was any chance of being able to do so earlier. 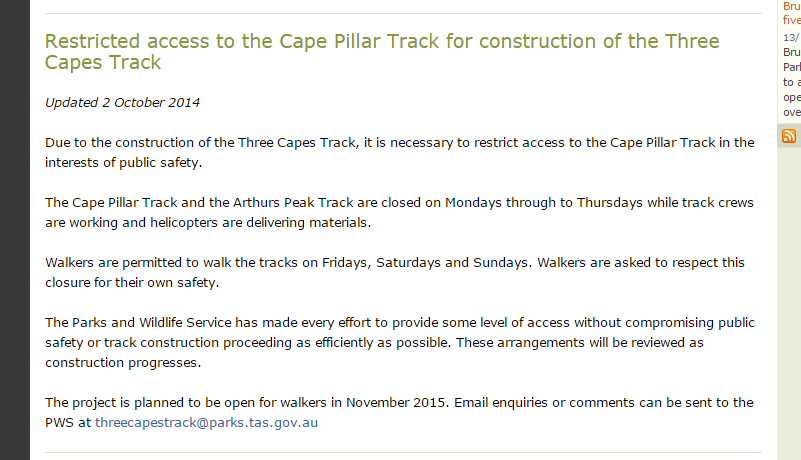 Probably stupidly, I had also sent a Facebook message to them. This was belatedly responded to (2 days - love that immediacy which social media brings) by someone stating baldly that the track was closed Monday to Friday and only open on Saturdays and Sundays. I engaged in some discussion via Facebook private message, from the top of the Rodway Range. I pointed out that the website (at that exact time) stated clearly the track was open Friday to Sunday, and I had made specific plans to walk the track on those days. I made clear it was not good enough that they had incorrect information on their website. They responded by telling me that track closures could be "dynamic". Indeed. They also admitted the website info was "erroneous".

Quite dishonestly, they then posted a new track closure item, and removed the old one. The new item, posted sometime between late on on the evening of 19 November and mid afternoon on 20 November is dated 6 November 2014. Talk about arse-covering. Hope nobody was travelling any great distance to undertake this walk on Friday, and were relying on the website information for their planning purposes. Wouldn't even have helped them to RING up, as when I did that I had the previous information confirmed clearly. 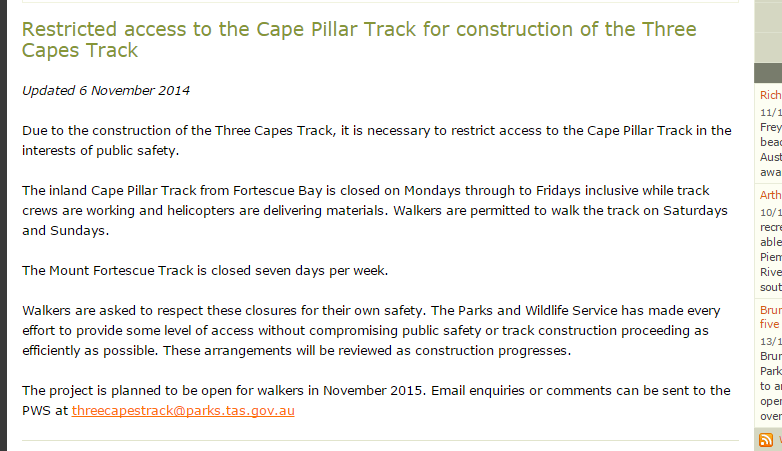 A bit of competence and honesty would be a good idea, and perhaps their staff could all be informed about what is actually going on. And finally, an apology wouldn't have gone astray. Instead I got what amounted to a lecture about how track closures were dynamic, and I should ring up. Which I had done, and I had already provided that fact to whoever was responding to me.

So, arriving at the end of the track, we find it's open from Friday to Sunday. Same sign out near the highway. Dishonest? Incompetent? Disorganised? Obstructive?

And don't get me started on why we need to close an entire track just because it's being upgraded. Undoubtedly it's because the actual track work is so over the top as to be ridiculous. The amount of investment in these feats of engineering will never be repaid economically. It's just public subsidy of someone's dream about the perfect walk. There isn't much of the natural world left that you have to bother interacting with once they've finished. If you've seen the staircases up and down the hills at Cape Hauy, you'll have the picture. Same need for a nice tidy environment that leads to people wanting to get rid of the nasty, confused, disorganised forest and replace it with nice straight rows of plantation. It will also probably lead to railings on all the big dangerous cliffs, because, let's face it, if you can't get it together to walk on an uneven pathway and step over small obstructions, you can hardly be expected to avoid falling off cliffs can you.

Too add insult, walking out to Cape Pillar reveals there to be NO active track work on the sections you are allowed to walk. The new sections where (apparently) work is going on are closed and you have to use the old track. I'm doubtful there is even any work on the two sections in question. I'll put up a post with some photos of the new splendiferous track. 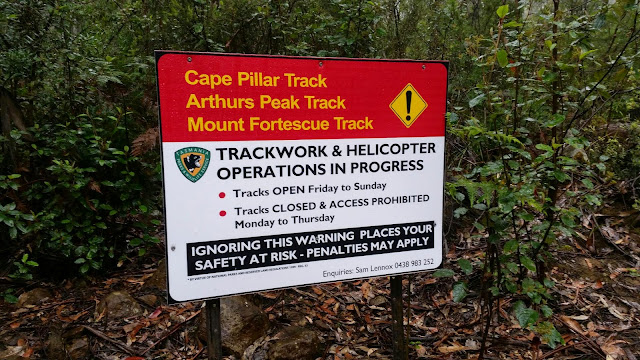 Wednesday 19th November was apparently quite warm in Hobart, with BoM recording 27.3 deg. It was a pleasant day at Mount Field, with the sun out all day, just requiring a jacket in the breeze at the summit. I always find this is a good solid walk. It's listed as 16km, but my GPS measured 19.9 by the end of the day. Even allowing for its inevitable meandering inaccuracies, I think it's more than 16km. I'll clean up the track sometime and see what it comes out as. Anyway, it requires a solid effort, with a good chunk of the track being bouldery and/or rough. Great views too, with much of western and south-western Tasmania visible. Here's an interesting little book that can enhance your experience of visiting, or viewing, kunanyi/Mount Wellington.

Our mountain has a fascinating natural history, and was part of Aboriginal life before the arrival of Europeans. Since then, it has been climbed, documented, recorded and depicted in many ways. In the words of John and Maria Grist, authors of The Romance of Mount Wellington, "Mount Wellington has always been an important part of the life of those who live in the city of Hobart, which nestles in its shadow".

Undoubtedly this it true. The mountain is a constant companion to the city, providing a bush and alpine playground within a short journey, a place to connect with nature, and a natural environment unlike those accessible from any other Australian capital city. It stands above the city, defining its boundary, and identifying it immediately. Here you really can go from the surf to the snow within half an hour, and you can see the surf from the snow.

The Grists have added to an extensive bibliography with this book. The pictures are mostly taken from their extensive collection of postcards, along with their own photographs of places and features. The original postcards are intriguing and revealing, dating back into the late 1800s. If you're familiar with a particular location, you will notice either the continuing similarity, or just how much a place has changed. Sometimes both.

For unfamiliar places, the book tends to excite exploration and discovery. I first saw the skating rink in this book, and have since "discovered" it, just off the road a little below the pinnacle. If you didn't know it was there though, you'd never suspect it, and this is part of the mystery, and yes, perhaps the romance, of Mount Wellington.

The book left me wanting more information about many of the featured scenes and places, but perhaps that's its purpose. You can buy The Romance of Mount Wellington at various Hobart bookshops - Fullers, The Hobart Bookshop and Dymocks come to mind. The book is published by Wellington Bridge Press, and can be purchased directly from the authors here.

For those wanting deeper information about some of the historic aspects and sites on the mountain, these documents provide very useful information. Note that sensitive sites are not necessarily accurately located, to reduce the likelihood of damage by fools.
Posted by Mark at 17.11.14 No comments:

I had a very enjoyable late-spring visit to Freycinet Peninsula including climbing Mt Freycinet and returning over Mount Graham. This walk isn't too hard, but has a good (579m) hill to carry an overnight pack over which is good training for other upcoming walks.

Many of the creeks were flowing, which allowed the carrying of less water over the mountains. I wasn't able to take full advantage of this, being quite uncertain about the creeks between Mount Graham and Wineglass Bay. In the end, even the creek at the southern end of Wineglass Bay was flowing a bit. This is normally a stagnant swamp, at best.  Lagunta Creek had good flow, and Callitris Creek, up high just below the Freycinet-Graham saddle, was flowing very well. It would be interesting to know if Jimmys Rivulet actually continued flowing all the way down to the lagoon behind Bryans Beach.

The weather was warm, providing an incentive for several dips in the sea. The sea wasn't quite as warm, but was nevertheless refreshing and contributed to improved apparent personal hygiene.

This was Cape weekend, so off to Cape Raoul the next day. Despite being generally warm, it was actually a little cloudy and breezy as I sat at the end for lunch. On the return I came across a couple of people watching an echidna. The GoPro turned out to be very useful for filming him when they left. He/she was basically unconcerned about my presence, snuffling the camera several times, and me once. The Vimeo version is edited down from the 20+ minutes I spent with him.

Had a nice walk to Cape Hauy after Christmas. At least they haven't yet put the railings up at the end. Here's hoping they decide not to.