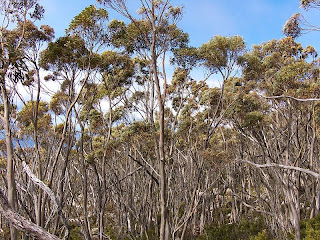 The upper part of the Icehouse Track on Mt Wellington is dominated by the Tasmanian Snow Gums, (Eucalyptus coccifera). There are the burnt remains of solid, thick-trunked trees, some of which have sprouted thinner new branches. In the main they are small and slender trees, and I'm assuming the older trees were destroyed or badly damaged in the 1967 fires, and what we see there now is the extent of the regrowth over the last 41 years. E. coccifera grows to 35m in ideal sheltered sites, but may only be a shrub or stunted tree of 6-9m on the "highest and bleakest sites" (Forest Trees of Tasmania; Forest Resources [Boral Timber] 1995). The trees at the top of the Icehouse Track are obviously the latter. 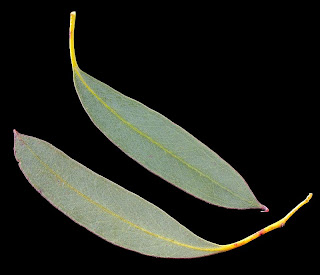 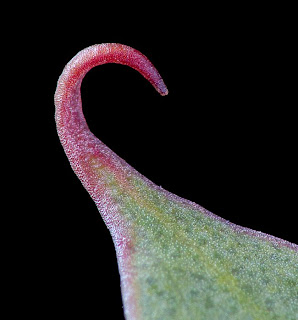 The tips are crimson, and hooked. 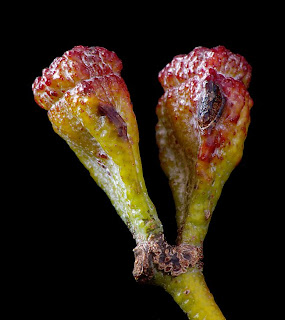 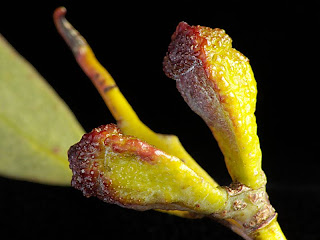 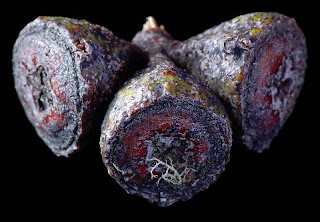 The capsules are cup-shaped with a wide flat disc, up to around 1 x 1.2 cm. 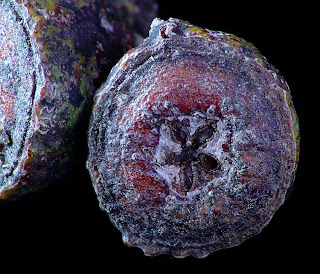 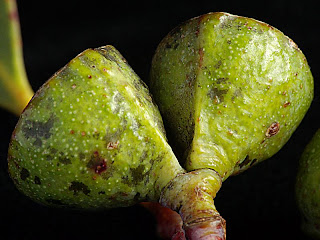 These are younger capsules, showing a deep red disc and green cup. 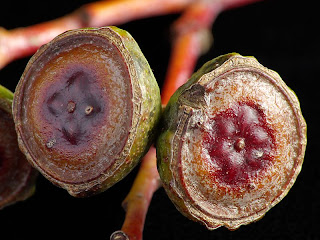 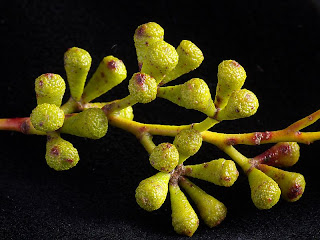 Now, the Snow Gums on Mt Wellington appear to be distinct from those found elsewhere in Tasmania in terms of the maximum number of buds found in a group. On Mt Wellington, there are up to three, and this can be seen in looking at the specimens there. Elsewhere there can be up to seven. At Hartz Mountains, this is the case. These buds and capsules are from trees on the plateau. 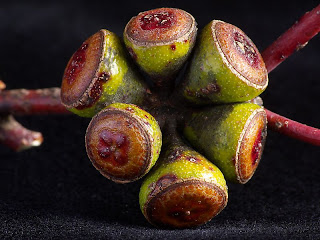 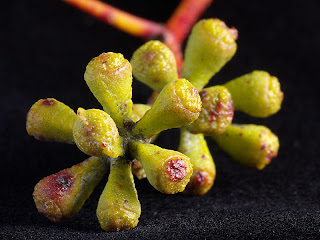 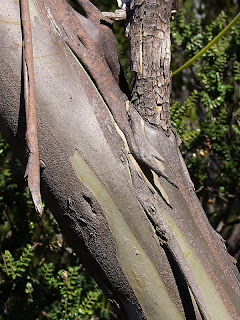 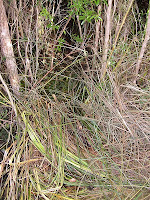 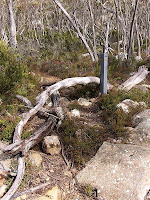 With a forecast of 20° yesterday, a walk up Mt Wellington was in order. It did say something about strong winds as well, which turned out to be quite true. The walk yesterday was from the Springs, up the Icehouse Track, across the plateau to the summit. Then down the ZigZag Track, which was a bit icily exciting in places, and back to the Springs before extending the walk to Junction Cabin and back. The Icehouse Track climbs steeply to South Wellington from The Springs, and is named for the icehouse remains viewable in several places along its length. These were built in the 1880s to store compacted winter snow for subsequent transport into Hobart during warmer weather. (See more info.) There has been some more trackwork done since I last walked up here, with some substantial track widening undertaken. In addition, someone has also made an attempt to obscure and/or block the sidetracks to the icehouses. I'm not sure what the purpose of such an effort might be. The entry into the bottom of the lowest icehouse has been filled with cutting grass, and logs have been used as a vague sort of "track-closed" indicator/track obscurer at the top icehouse. In between but close to the lower icehouse, there's a track which may go to an old hut site, and this has also been obscured, although not very well. All a bit strange. Maybe someone intends to improve these sidetracks and remains. The lowest one could do with a bit of vegetation cleared if its actual construction is to be viewed easily. There are also two icehouses, known in 1970, which are hidden so well that I haven't yet found them. 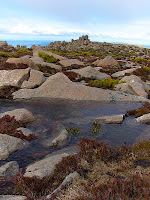 The walk across the plateau was livened up considerably by the accurately-forecast strong and gusty winds. These made standing upright a challenge at times - I'm sure the little tarns actually had white-caps on their surface. In the pinnacle carpark, without the wind-inhibiting friction of the plateau's boulders and low vegetation, I found that even the friction of my boots on the gravel was insufficient, and the wind was actually moving me slowly across the surface while I balanced myself against its pressure. Some smaller people were having a lot of trouble returning across the road from the viewing shelter to their vehicles. The maximum gust yesterday was 111 km/hr at 10:48am, a little short of the maximum earlier in the year (19th August) of 144 km/hr. 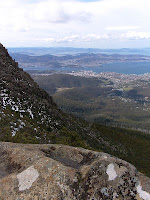 The ZigZag Track still has quite a deal of snow and ice on it, and this made for a slower and more careful descent than would otherwise be required. When it's windy on the summit, the ZigZag Track is usually much more sheltered, even quite still, being in the steep bowl between the two main buttresses of the mountain. The views from here are very good over Hobart and beyond. 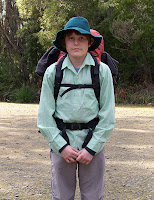 Alex and I went to South Cape Bay for the weekend. Alex wants to do the Overland Track next summer, so he needs to practice carrying a pack. I could do with keeping in practice too, especially if I have to carry stuff through the OT for him. Anyway, we loaded him up with his own gear and some of his own food, and he managed very well. I don't think he's carried this much before, as, in the past someone else has carried his food. He did a good job, and only had problems when he found he was carrying too much weight on one bit of his anatomy or another. The walk to South Cape Bay is quite easy with only small undulations, so it's a good practice walk. The weather was quite kind on Saturday, but did deteriorate today. 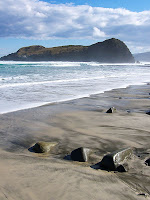 There were quite a few walkers on the track on Saturday, and the sun was out for much of the time. Once on the coast we needed a bit of extra warmth, but it was tee-shirt weather across Blowhole Valley. The waves weren't huge, but were sweeping well up the beach - it was one of those days where a slightly larger wave would sweep an extra 50m up the beach, catching the unwary off-guard. I noted that there was still just one Hooded Plover (Thinornis rubricollis) in evidence. Having seen two here (at least) in previous years, I wonder if this one is missing a mate. 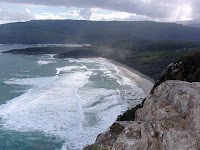 After trying fishing for a while, we went for a walk up to the lookout on the westward side of Coal Bluff, with the view along the 2nd and 3rd beaches on South Cape Bay. This track is muddier than anything up to that point, but nothing like the rest of the South Coast Track. The view from the lookout is well worth the effort, with grandstand views along the beaches, to South Cape and to Pindars Peak. It started to rain while we were there. Alex pointed out that if it was to rain, we could sit in the tent and play chess. At this point I realised I hadn't put the magnetic chess and draughts in the pack. I told him it might have to be hangman. I described the mud on the SCT to Alex as we came back down the hill, and as a result he has decided not to do that track with me. Two other walkers who had gone to South Cape Rivulet returned to Lion Rock having decided that the Rivulet campsite wasn't as good as Lion Rock. I tend to agree, so I'm not sure what the attraction of the Rivulet is. Maybe it's just because when people come across the South Cape Range they're so depressed by the mud that they want to stop at the first flat place. There are plenty of spots to camp in at Lion Rock. I like the sandy area at the bottom of the steps. I think it would be a bit exposed in poor weather though. 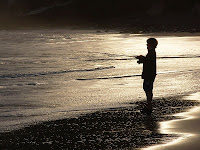 Alex went fishing before dinner, the idea being that he would supplement the fare. The water was freezing, and it was hard work for a small bloke to cast a lure into solid surf with a nine-foot spinning rod. However, he persevered, and actually caught us a salmon. This happened quite early on, and I think was the main motivator behind his hour-long effort. The salmon was delicious, although a bit hard to cook in an aluminium suacepan over a Whisperlite. Alex was very proud of his catch. 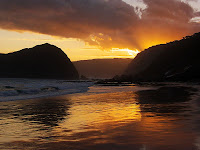 The sunset was attractive, and made a pleasant end to an enjoyable day. Our camping companions were also fishing. They caught one salmon, quite a bit smaller than Alex's and threw it back. It rained during the night, but eased up for breakfast and packing. We tried to fish again, but between us lost two lures to snags. The small salmon cost $9.00. The walk out was dry to start with, but rain set in half-way. We met a party of four with minimal rain gear going the other way. One had just a windcheater. Hope they enjoyed their walk, because by the time we reached Cockle Creek it was raining quite solidly.