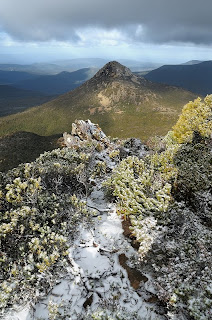 The BoM provided their usual pessimism-laden forecast. The weather station at the Hartz Mountains was tending to bear this out early on, but the sun came out in Huonville. The weather observations showed slow improvement, so after an early lunch I headed up there. It was chilly but dry with a cold breeze, and the sun came in and out making for a pleasant walk. Hat and gloves were a must though, and after pottering about on the summit and nearby taking photos, my hands were cold enough to need the second pair of gloves. Later I would find that the highest recorded "apparent" temperature for the Keoghs Pimple weather station was around -5.5 Deg C. No idea what it would have been in the strong breeze blowing from the west high up on the peak. Nice views though, with a bit of ice and snow making for interesting surroundings.

The views from Hartz Peak are really very impressive. With a bit of cloud and rain about, Saturday wasn't the clearest, but the southern ranges were quite obvious. Here are views from Mount La Perouse, through Pindars peak, Mounts Wylly and Victoria Cross , Precipitous Bluff and the Ironbound Range. This last is the largest obstacle along the South Coast Track, and can be seen in this photo as the range in the far (and hazy) distance to the right of centre with the pyramid on its top. The south coast track crosses this range, climbing most of the way to the top.

Mount Picton lies across the Picton River valley from Hartz. In this valley forestry operations continue, most especially below Hartz on the western slopes where they cannot be seen from this vantage point. Some of the forests being harvested were excised from the national park. My view is that these forests should not be harvested, but instead amalgamated into the surrounding national park and World Heritage Area to complete the contiguous protection of the upper Huon catchment areas. These forests are worth more protected and standing than mulched up for export to Asia as woodchips. The good thing about the weather on Saturday was that it concealed the forestry scars high on the slopes of Mount Picton, usually visible from here. This view is of Mount Picton across Hartz Lake.

Found quite a few interesting fungi on this track today, some of them new to me. See all the photos at Picasa. 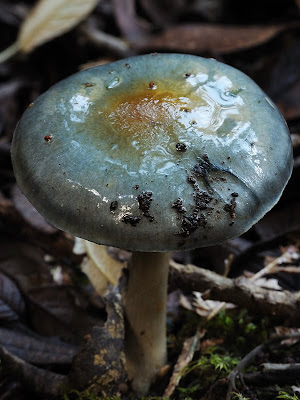 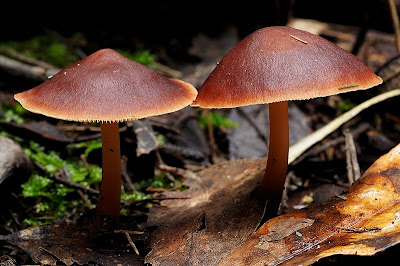 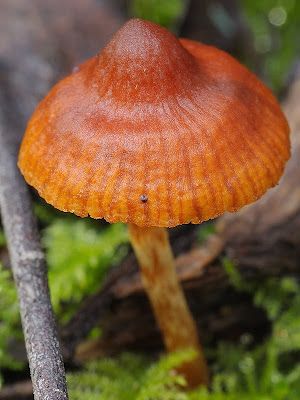 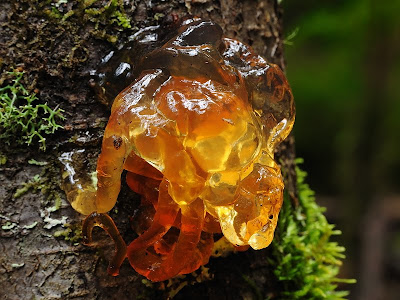 Had a nice walk today on the front of Mount Wellington after it finished being rainy. It was very chilly out of the sun, but warm enough if you could find a sunny spot. It really was a lovely winter day in Hobart once the rain cleared. 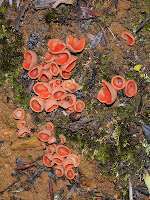 Found this fungi. I'm working on an identification, could be Aleuria rhenana.

The swans, including Scooter, will now appear on the Huon Valley Nature Blog. If you're following Scooter, there's a new post there today. I won't be alerting again from this blog.
Posted by Mark at 6.6.10 No comments: