This was the weekend Hobart was very hot all weekend. We had arranged a walk to Lake Skinner, but for various reasons people pulled out. I had been keen on walking to Snowy South in fact, but given the day was forecast to reach 37º and hit 38º I think, I decided against it. An early morning trip to Hartz Peak seemed more like a good idea. It was 18º at 6:30am when I left the carpark and just got warmer. Anyway, I had a lovely walk as the sun rose. 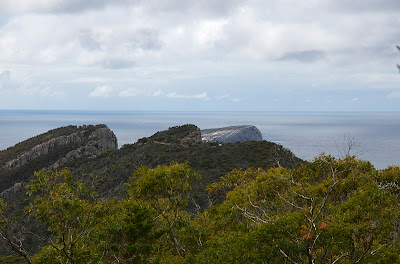 The Hippolyte rock sits around 5km off Cape Hauy. You can see it from the top of the hill before heading down to the cape. When the air is clear, it is hard to tell from some places how far away the rock is - it seems to be quite close, and from the right place the perspective makes it look like the top of just another lump of rock sticking out next to The Lanterns.


I doctored this photo to show the difference the atmospheric conditions make. When the air is damper or hazier, it softens the contrast and the distance to the rock is fairly easy to discern. If you walk there, see how it looks to you. Can you tell which is the real photo?
Posted by Mark at 17.3.12 No comments:

Cape Hauy Trackwork - Getting ready for the Three Capes Walk

The Cape Hauy Track has always been OK, with a bit of work done across the top of the hill some years ago to reduce erosion on the damp bits. Obviously though, the prospect of 10,000 extra walkers descending on it if the Three Capes Walk is ever completed meant that some upgrades were required. Some upgrade! They've cut a wide swathe from Fortescue Bay up onto the top of the hill, and put in a wide benched track, stonework, bridges and more, as well as re-routing a few bits.


The track down the hill onto the cape proper has been somewhat re-routed and widened, and it is even more obvious visually than it used to be. The track workers were hard at it out on the cape, and I saw a Facebook post just after my walk from the PWS saying that the last bit of the track was to be closed for 4-6 weeks from 15th February 2012 to allow work to be done there. I'm just hoping they don't put railings around the end - that would just cap it off.


Overall, the work seems visually excessive, but is very well done and must provide the level of walking ease and comfort which will be expected by the punters who are apparently going to pay $200 each to walk the Three Capes Track.

I will admit to being impressed with the drystone arched bridge, great work. Likewise the steps and other stonework is superb, it's a pity the track couldn't be suitably hardened without turning into a highway. The Three Capes Walk seems economically marginal at a cost of $35M, and the alternative proposal is more attractive I believe.

Had a nice walk, at this well-trodden location. With the Three Capes Walk in the news recently I thought it was worth a trip to see how the grandiose track work was progressing. See next blog post for some info. Anyway, it was a nice day, sun, blue sky, fluffy white clouds, gentle breezes.

This was a hot weekend, and the Sunday started very warm with a forecast of hot. A walk in the forest to Lake Nichols seemed like a nice idea, at least there was a little shade. This walk starts along the road to Lake Dobson a couple of kilometres below Lake Fenton at a small signposted carpark, and is the first part of the walk to Mount Field East.