Good walk today to South Cape Bay with the old lags brigade. Walk map here. Sunny at Cockle Creek, but cloudy at the beach. We could see the sun shining around at South Cape Rivulet, but the sun didn't come out on South Cape Bay beach while we were there. The air was heavily laden with spray. However, it was quite warm with only very light breezes on the beach. The surf was only moderate, but a wind was blowing spray off the top the waves out from the shore. Small amount of drizzle only. Quite a few surfers were heading in there this afternoon as we walked out. Ron and Phil competed to see whose arthur-itis was worst, I think Ron won.

The sand has reappeared along the whole length of the beach, and the spit that was evident previously has gone.

The old lags enjoyed a quiet stroll along the beach. 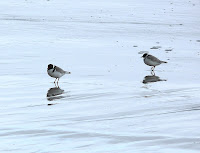 Two Hooded Plovers were wandering about. There are often just two of these birds on the beach here, I wonder if they are the same two I have seen over several years. These are an endangered species in some states. There are estimated to be only up to about 2000 birds in Tasmania.

This as-yet unidentified plant is growing on the cliffs at South Cape Bay. This one was particularly large, and made a nice picture. 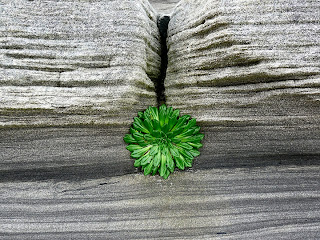