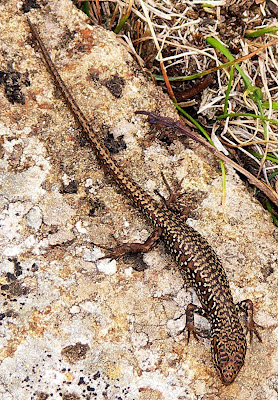 This skink didn't want me to photograph him. I'll have to go back and stalk him more stealthily, because this photo isn't as good as I'd like it. My "Snakes and Lizards of Tasmania" (Hutchinson, Swain, Driessen - 2001) says it's an Ocellated Skink, unable to be mistaken for any others if seen closely. This skink has been reclassifed from genus Niveoscincus to Carinascincus, see below. The National Parks site calls it a Spotted Skink. The pictures don't seem quite the same. In the book I have, the patterning is very clearly the same as the specimen I photographed. They grow to 85mm, my guess now is that this one was about 50-60mm. He wouldn't have let me pop a ruler down next to him. They eat insects and some flowers and fruits. They describe them as "beautifully patterned", which he certainly is. He was photographed on the Icehouse Track, Mt Wellington.