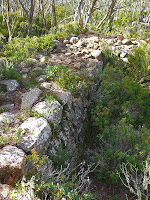 According to David Leaman's book, Walk Into History In Southern Tasmania, the icehouses were built between the 1850s and 1890s. The Governor, Sir William Denison had the idea. The icehouses are set into the ground, with thick drystone dolerite walls. There are several along the Icehouse Track, but the easiest to view is the uppermost one.

The icehouses had brushwood roofs, and in winter were packed tight with snow. Then in summer, blocks of ice were cut out and transported to Hobart by packhorse. The Icehouse Track still follows the bridle trail in places - apparently where it is least steep. Given the effort that must have gone into this whole enterprise, ice must have been in quite high demand, and I assume it commanded a pretty high price in 19th century Hobart.Here's a link to an 1873 photograph taken from near the upper icehouse. I've got a photo of the left-hand rock formation, and I'll be checking out how much it has changed in the 130 years since then. 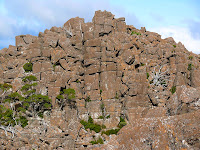